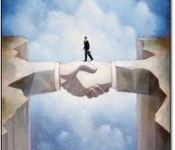 Servant-Leaders will face a variety of conflicts and problems in his/her service: everything from plugged toilets and church mice to Sunday School kids in an all-out fist fight and two church leaders in an all-out silent treatment (or visa versa); not to mention one’s personal conflicts in marriage, family, and relationships in and out of the church. It is imperative that God’s people, especially leaders, know how to manage conflict effectively. After all, we still are humans dealing with humans! Where there are people there is conflict. Conflict is an inevitable part of life. Problems aren’t              . They are                                   . They just need to be handled and solved.

One who has no problems is already six feet under. – Dr. Norman Vincent Peale

Not all conflict is negative. Having to solve problems and/or manage conflict is not a sign of weakness or failure in one’s leadership skills. Some conflict is healthy and if viewed positively can be an opportunity to effect positive change! In fact, without problems one is doomed to fail because he or she is probably not taking risks as he or she strives to improve efforts and kingdom results. However, as inevitable as problems/conflicts are, one does not want to spend the majority of his/her time putting out fires! Where unhealthy conflict raises its head repeatedly, potential risk exists to cause negative consequences in the Kingdom. Unity, vision, and productivity (Kingdom advancement) tend to decrease as people focus energy on their distress rather than their work/mission/ministry. The negative consequence can have far reaching effects if not nipped in the bud quickly. Jesus admonishes, “Reach agreement quickly with your accuser” (Mt. 5:25). Effective leadership skills efficiently resolve and significantly reduce conflicts.

If the anger of a ruler flares up against you, do not resign from your position, for a calm response can undo great offenses. Proverbs 10:4 NET

Download the full lesson to: 1. Understand the anatomy of conflict, 2. Discover common causes and symptoms of conflict, 3. Learn to care-front, 4. Assess which “influence styles” you use, misuse, and avoid, 5. Learn 8 principles to effective conflict resolution, and finally 6., Solve common problems in seven simple steps.