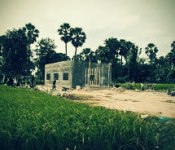 Abraham Lincoln, a famous president of the United States of America, once said, “You cannot help men permanently by doing for them what they could and should do for themselves.”

Once national churches have been founded and are growing, the missionary must be careful not to slow down the speedy growth of the church. Church growth and evangelism can come to a standstill when leaders become satisfied with maintaining the church organization as it is. It is necessary to understand that when referring to a “missionary,” it could mean anyone, from anywhere, including any race of people. The great commission was given to the entire church regardless of location, income level, or social status.

One basic principle is that the longer a missionary maintains an exclusive leadership without sharing the responsibility, the more difficult it is to include nationals in leadership responsibilities and eventually to transfer the responsibilities of leadership of the church to the nationals. When leadership is transferred to nationals, the missionary can continue in leadership, but in a minor role, not as the principal leader. A famous missionary, Hudson Taylor, even stated, “I look upon foreign missionaries as the scaffolding around a rising building. The sooner it can be dispersed with, the better; or rather, the sooner it can be transferred to other places, to serve the same temporary use, the better.” What would we think of a builder who insisted that his scaffolding remain in place permanently for fear the building would collapse?

The three lessons in this series primarily address the relationship between the missionary and the national church. Many of the concepts can be applied to other leadership relationships such as a presbyter and the ministers for whom he is responsible, a pastor with his local leaders, or a national leader and the leaders with whom he works.

In beginning and developing the national church, care must be taken to establish the following things:

The principles of church growth and organization within the national, indigenous church encompass the following four vital areas:

1. The church is involved in evangelism within its borders. The church reaches the lost using national ministers, equipment, and finances. This is often referred to as a “self-propagating church.”

2. The church has, at its disposal, national leaders that are able, under the direction of the Holy Spirit, to govern the affairs of the church. This begins at the local church but works its way up through the organizational structure of the entire national church. These leaders adhere to the guidelines established in Acts 6:3; I Timothy 3:1-13; and Titus 1:5-9. This is often referred to as a “self-governing church.”

3. The church has instituted God’s plan of tithes and offerings; therefore, a system already exists to raise funds for the various ministries of the church. When the indigenous church reaches this point, it is referred to as a “self-supporting church.”

4. The local church should care for the local pastor. The local churches should also contribute to the operation of the national church. When the national church supports its own efforts, it opens the door to expansion. It may be felt that the people of a nation are very poor, but God can raise up a church anywhere. “People value religion on the basis of cost and they don’t value the cheapest ones the most. Religions that ask nothing, get nothing” (Rodney Stark, Touchstone, January/February 2000, in Discipleship Journal, May/June 2000).

5. The Honorable Ekow Spio-Garbah, formerly Ghana’s Ambassador to the United States of America, wrote while commenting on the U. S. Foreign Aid policy, “What Africa needs today is not someone who can give it fish to eat so it can ask for more fish each day. All Africa is asking for is a FRIEND who can teach it to fish better so it can feed itself FOREVER.” That was well spoken and also should apply to national churches everywhere. With these three areas covered, the national church is capable of keeping itself alive. There is still one more step.

6. The church begins sending out missionaries to other countries and cultures. The national church becomes a missionary-minded church. This is referred to as a “missionary-sending church.” … read more and finish the entire lesson.