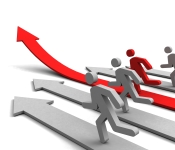 Leadership is a force that gives direction and forward movement to a group. Like the power of the universe, it exerts itself with great energy; like gravity, it works inexorably. Given time, it overcomes the innate resistance of those it seeks to lead. Yet it applies its power quietly and subtly, a gentle influence, often working behind the scenes where no one is aware. Godly leadership is content to accomplish its purpose without calling attention to itself. It operates for a higher purpose.

The group upon which the force of leadership is applied is usually a motionless object due to its own lack of initiative. It doesn’t know which way to turn. It doesn’t know how to get started. But God, by His grace, provides leadership so that His will may be done and His glory revealed in the earth. The leader has vision. He recognizes the purpose. He established the direction. He charts the course. Without leadership, people will scatter like sheep without a shepherd. With leadership, they will go to a place where they could never have gone on their own.

A group with direction needs inspiration. This is the power that propels it forward. The church is often lacking in truly inspirational leaders. These are men who are not building their own kingdoms, not focused on their own agendas, not wise in their own opinions, but are living for one thing and one thing alone – the glory of the Lord Jesus Christ. This single-mindedness, this purity of motives, this intensity of devotion is what causes others to want to go along. It is subtle in its power yet powerful in its influence, never needing heavy-handedness, never lording over or manipulating. People follow an inspirational leader because they want to. And if they don’t want to, the inspirational leader feels neither personal failure nor personal rejection, but only a genuine sorrow over the needless torment that awaits them. He doesn’t harangue or bully, but like Paul, weeps for those who are enemies of the cross, whose god is their belly and whose end is destruction.

Leadership is a force that gives direction and forward movement to a group. The group is the body of Christ. The direction is the glory of God. The forward movement is walking in the ways of Jesus. And the force is the love of Christ that compels. When this kind of leadership steps into the void, a surge of divine power will pulsate into the spiritual realm causing demons to quake and angels to rejoice.

by David A. Huston