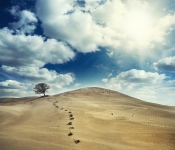 Little did we realize God was giving us a free home demonstration on handling all the interesting challenges that come with leadership that fateful day in Kenya, Africa.

Three missionaries were on their way to dedicate the first permanent church building (the work in Kenya had begun only a year before). They neared the equator in a mountain pass when the horrified eyes of two passengers saw a large stake-bodied truck hurtling down the narrow tarmac road, evidently having lost his gears and brakes.

The driver, John Harris, decided the wise thing would be to get out of the way, so he quickly pulled 23 feet off the road (all the space the pass allowed) and switched off his engine. His Superintendent, Bill Cupples, lay asleep in the back seat. But the driver did not hurtle on by, he evidently thought the small English car could stop his wild plunge so he turned the truck toward it and stripped off the whole left side including doors – the cab sheered off the base of the truck and plunged on into the mountain side where they found the driver dead. John Harris was temporarily knocked out. When he came to, he realized my husband, E.L. Freeman, had lost an ear and his left arm was almost severed from his body, attached by less than two inches of flesh; and the blood gushed out. He tied his jacket around him to staunch the blood somewhat and prayed for help to come.

An Indian man stopped to help them and told John his friend in the back seat was killed by the impact. Bill Cupples did missionary service Liberia, but he had only been in Kenya seven months when he went to Heaven. In Africa, one must always go to the police station before going to the hospital. So, they bounced down an unpaved road and finally many hours after the accident the tow men got to a small hospital in the town of Nakuru; the doctor had been to another country, Tanzania, to see a patient and came much later.

When I finally could get there to see my husband, they had found his ear and sewed it back on – it looked like a big grubby potato. The doctor also sewed his arm back on – but he didn’t know if it would ‘take’ or not. Then, he motioned me to his office to hear the bad news. Because of epidemics of contagious diseases, the blood bank in Kenya had become contaminated and had to be destroyed; he said, “your husband might live, in spite of his serious injuries, IF we only had some blood to give him – he has lost 3/4ths of his blood – no one can live with only ¼ of his blood.” He finally agreed to release him to the big Nairobi hospital if I could arrange a mercy flight.

In Nairobi, I heard the bad news repeated several times by several doctors, they agreed the fact he still lived was a miracle, but they expected him to go at any time. Then I remembered the day of the accident as I reeled from hearing the bad news, God whispered, If you will praise me there will be victory. I remember asking, Lord please give me a scripture on that? And he put a billboard in front of me with these words on it, Ephesians 5:20 “Giving Thanks always FOR all things unto God and the Father in the Name of Jesus.” I didn’t know that such a scripture was in the Word, so I said, two witnesses, please Lord, give me another verse. Another billboard appeared with this verse on it: Hebrews 13:15, “By him therefore, let us offer the sacrifice of praise to God continually, that is the fruit of our lips giving thanks to his name.” Finally I understood, it’s the sacrifice of praise He desires from us – when praising isn’t easy, let it pour forth continually!

I remembered the vision enough to praise the Lord for his recovery when I was with him, but on the 8th night from the accident, the doctor said, “This is his last night on earth – he will die tonight.” When I found him in a coma I purposed, “If praise will do it, tonight I will praise Him all night long.”

When I got back to my room, I kicked off my shoes, turned off the light and started praising and worshiping the Lord at 9:00 P.M. I refused to think on anything but just praised Jesus with all my heart and might. When Sister Harris’s cuckoo clock struck 2:30 A.M. a beautiful blue light filled my room and I knew my praises had reached the throne. When I took a taxi to the hospital the next morning, I found my darling sitting on the side of the bed looking fine and giving orders as usual. Before we started walking for him to regain his strength, I looked at the chart at the foot of the bed. It said at 2:00 A.M. no B.P. as it had everyday – but the 5:00 A.M. entry said normal blood pressure. My five and half hours of praise brought Jesus to a Nairobi hospital to deliver a blood transfusion.

The doctor came in while we walked and praised Jesus. He said, “Something happened in the early hours of this morning that we cannot explain and don’t understand, but this man can go back to his home in South Africa next week. His left arm will dangle uselessly, however, because the nerves have been damaged.”

He repeated the warning about the useless arm as we left the hospital the next week, but gave us all the x-rays and information to give to the three orthopedic surgeons who would remove the cast on his left arm in three weeks. On the way home, I told my husband how God healed him and we decided to praise God for the useless arm. The day the cast was cut off, they counseled me to be brave because it would be hard for me to see that arm dangle. They said they would have to do several surgeries on it for comfort’s sake. I praised the Lord silently all the while. When the cast fell to the floor, he clenched that fist. They tried to reason that away – within several days he regained perfect use of that arm again, and used it normally for the rest of the 26 years he lived.

But we had made a wonderful discovery, the sacrifice of praise worked wonderfully for every challenge or obstacle we faced as leaders. And since he went to glory, I operate in the worship level – continually! It may not make sense but if I had space to tell you all the battles that have been won in this arena, no telling how long this would be. I will close with telling you about our four grandsons who became hooked on drugs – two of them appeared hopeless cases – but through worship all received permanent deliverance! One tip, don’t whine, sound sad, or remain mournful – that joyful sound precedes glorious victory.